Bristol’s new hospital - one year to go and naming revealed

On Tuesday, May 28 the one-year countdown to the opening of the new £430 million hospital at the Southmead site begins.

The Trust takes ownership of the building from the developers, Carillion, in March 2014. The first patients will be moved into the state-of-the-art new building in mid-May next year with all other patients, teams and departments moving across during the following two weeks. By May 28 2014 the hospital will be fully open.

The building itself is now completely watertight and work is well underway to add the fixtures and fittings to each area. The atrium is beginning to take shape, and the first 32 bedded area is already complete inside.

With this new beginning approaching, late last year, the Trust asked staff for suggestions of what they would like to call the hospital site.

The shortlist came down to three variations on the existing Southmead name, Bristol Brunel, Elizabeth Blackwell (after the world’s first female doctor who was born in Bristol) and Prince William.

These were then opened up to the public and our staff and a poll was launched on the Trust’s website and with the Bristol Post newspaper. More than 3,700 people gave their preferences.

As such, we listened to the community we serve and decided to keep the hospital site as a whole as Southmead Hospital, but to include the word ‘Bristol’ in its title. As such the site will be called Southmead Hospital Bristol.

This is in recognition of the significant increase in the number of services provided, with staff and teams moving across from Frenchay, and to help patients and those referring to the Trust who live outside our local area. We also decided that the new hospital building will be called Brunel.

Marie-Noelle Orzel, Chief Executive of North Bristol NHS Trust, said: “Anticipation really is beginning to build now that we’ve entered the last 12 months before our big move into the new hospital. The Brunel building really will be a centre of excellence with state-of-the-art facilities supported on site by superb existing services such as maternity, pathology and breast care.

“On behalf of the Trust I would like to thank everyone for giving their suggestions to name the site and the building. We were really pleased with the results.

“In addition the Trust is preparing a public campaign to inform people about the move from Frenchay to Southmead.

“Our research has shown that whilst the public are familiar with the new building taking shape at Southmead, they are less aware that almost all the exceptional teams and services from Frenchay will be moving to Southmead including the major trauma centre, neurosciences and plastics and adult burns – so it really will be a case of brand new hospital, same familiar faces.”

Some of the main benefits of the new hospital include:

Keep up to date with the latest news and details of our move in May 2014 to new hospital via www.nbt.nhs.uk/newhospital which is regularly updated with the latest photos and news. 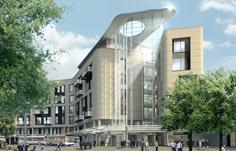 Bristol’s new hospital - one year to go and naming revealed