One of our care assistants in Southmead Hospital’s Emergency Department has been presented with an award for her efforts in supporting victims of domestic violence.
Emergency Care Assistant Rose Lockhart was presented with The Ann Wood Award for her “outstanding contribution to tackling domestic abuse in South Gloucestershire” in acknowledgment of her “determination and dedication” in supporting people who had disclosed that they were victims while in the department.
The annual award is given out by the South Gloucestershire Partnership Against Domestic Abuse.
Staff in the Emergency Department received training from domestic violence charity Survive to help them feel more confident in broaching the subject with patients they think might be victims and understanding how they can provide advice about the next steps to take and help with referrals. They also work with Independent Domestic Violence Advisors (IDVA) within the department to support victims of domestic abuse. 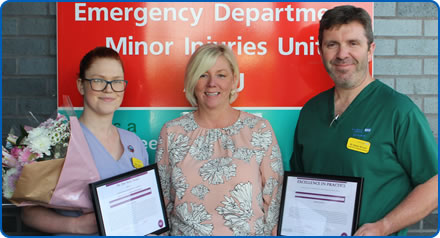 Rose, who was described as an “asset to the department” has worked at Southmead Hospital for almost three years and was praised in the awards submission for “going above and beyond all realms of her call of duty when identifying a patient who has been subject to domestic violence and abuse (DVA)”.
The nomination continued: “Rose has ensured that patients presenting and disclosing DVA are always given their options, that they are listened to and that they are kept safe during their time in the department.”
Rose was overwhelmed to receive the award for “just doing my job” and credited her colleague nurse Anna Harper – who won the same award in 2014 – for getting the team involved and IDVA Faye-Marie Stockden for the training she has carried out within the Emergency Department.
“I think it’s massively important for us to protect our men and women, that domestic violence and abuse is obviously not acceptable and we don’t want to feel that these people are slipping through the net,” Rose said.
“There have been some really difficult things that I have heard and some will probably stick with me forever and you just hope that after they have told you that things will turn out better.”

She added: “I was totally overwhelmed to receive the award. This is just my job. It’s what I do. I didn’t realise I was thought of so highly by my colleagues, I thought I was the same as the next person.”
Emergency Department Consultant Adam Brown was also honoured for his commitment to the victims of domestic violence with an Excellence in Practice certificate.
He said: “We see all sorts of patients here with illnesses and injuries and social problems and it is important that we use the opportunity we have with every patient to ensure that they are going home to a safe environment, when domestic violence means that is not the case it is vital that we identify that and provide them with the support to improve their situation.
“These awards are a great tribute to the work that has been done here, having the IDVAs in the department and improving the profile of domestic violence among staff here at all levels in ED – medical, nursing and non-medical staff have embraced this as a challenge we need to address and as a team we are clearly providing an excellent service to victims of domestic violence.”
Ward Manager Matthew Crabtree added: “We are so proud of Rose, she is an absolute asset to our department and we are happy to have her in our team.”