The head of our Bristol Genetics Laboratory, Eileen Roberts, has been awarded an honorary degree by UWE Bristol. 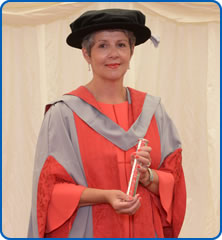 The award was made in recognition of her commitment to providing genetics and genomic services to the UK and internationally, for delivering the 100,000 genomes project as a partners in the West of England Genomics Medicine Centre (WEGMC) and for supporting UWE's genetics and genomics education and research.

The honorary degree was conferred at an awards ceremony of the Faculty of Health and Applied Sciences at Bristol Cathedral.

As well as heading up the Bristol Genetics Laboratory at Southmead Hospital, Eileen is a Consultant Clinical Scientist and Lead Scientist for North Bristol NHS Trust (NBT).

Eileen has led the Genetics team at NBT since 2010, having worked at the trust since 2005 as a consultant scientist. In her role she is responsible for delivery of a comprehensive genetics laboratory service and has overseen many developments in genetic testing, particularly in cancer and common genetic conditions. She is responsible overall for the training and development of a team of 100 staff. As lead Sscientist for NBT Eileen is responsible for advising and sign-posting on education and training activities for healthcare scientists (of which NBT has more than 600).

Prior to this Eileen was a Principal Scientist in the West Midlands Regional Genetics Laboratory, and was part of the team responsible for its growth from a staff of about 25 people in 1990 to more than 100 in 2005.

Eileen completed her Honours Degree in Biology at the University of Manchester. She became a Member of the Royal College of Pathologists in 2004, and a Fellow in 2008. She also holds a certificate in Health Services Management.

Throughout her career Eileen has been passionate about training the workforce of the future and has been a member of several working parties, including the National Occupational Standards working group, and the Modernising Scientific Careers pilot working group which led the development of scientist and practitioner training programmes including the BSc courses in Biomedical Science at UWE. She is an Examiner for the Royal College of Pathologists and for the National School of Health Care Science.  She has contributed to a number of research studies and publications including the 100,000 Genomes Project and other large scale genomic projects which hold great promise for further gene discovery and improved diagnosis and treatment.

She co-chairs (with Professor Varadi) the Workforce and Development Group of the West of England Genomics Medicine Centre (WEGMC), which is responsible for the local contribution to the 100,000 Genomes Project, and sits as a member of WEGMC partnership board.