A remarkable archive of pictures showing Southmead Hospital, staff and patients over the past 100 years has been opened up online for the first time.

A website charting the development of the new hospital at Southmead is now live and includes amazing pictures dating back to when it was used as an army hospital during the First World War. 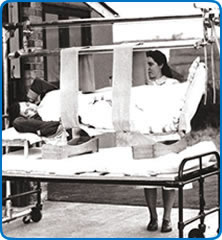 In the early 1920s the facilities once again became a workhouse before the Southmead Infirmary was built in 1924 - later renamed Southmead Hospital.

Some of the pictures show early medical procedures and equipment, including a baby in the first oxygen incubator.

The arrival of the first surviving quads in the world to be born by caesarean in 1948, the Good quadruplets, is also captured on camera.

Photographs of doctors, nurses and porters are included, charting the change in uniforms through the 20th century as well as images of wards showing changes in nursing care.

The archive also includes visits by royals and dignitaries including King George and Queen Mary being welcomed by hundreds of people to open the new surgical wing in 1912.

The opening of Elgar House in September 1991 by Diana, Princess of Wales is also remembered.

The pictures have been given to the project by people whose relatives worked at Southmead or were cared for at the hospital. 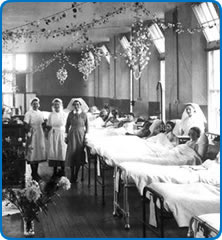 People can also submit their own photographs of Southmead Hospital through the ages.

As well as the archive gallery, the new website has an interactive map to explore how the new £430m hospital at Southmead will look when it opens in 2014.

There are opportunities to be kept up to date with progress and Southmead’s environmental credentials.

“It has been wonderful to see these snapshots of hospital life through the 20th century.

“Southmead Hospital, its staff and patients have all been at the heart of Bristol for more than 100 years and it is right that we mark this as we move into the future in a state of the art building.

“Construction work is well underway on the new hospital and our website will help to ensure that the public are kept updated every step of the way.”

Explore the new hospital at Southmead, view the picture archive or find out how construction work is going at www.nbt.nhs.uk/newhospital.

You can add your own photographs of Southmead Hospital to the archive by uploading them on the website. If you know anyone in the images, please contact us via the website.