Brother and sister Reuben and Floren Blake were conceived from the same batch of embryos but born five years apart after fertility treatment at the Bristol Centre for Reproductive Medicine (BCRM).

Parents Simon, 45, and Jody Blake, 38, had been trying to start a family without success and began fertility treatment in 2005.

During the medical process, five embryos were created and two implanted in Mrs Blake, which resulted in the birth of Reuben on December 9 2006.

The remaining three embryos were frozen until the couple, from Cheltenham, Gloucestershire, decided to try for another child last year.

Against the odds, Floren arrived on November 16 2011 - two weeks before her due date - but five years after her twin brother. 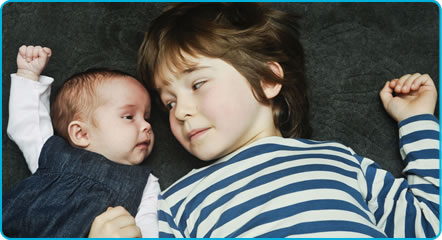 Mrs Blake said: "We obviously had nine months to get it straight and to think 'Gosh, we're having Reuben's twin', but it's incredibly special.

"When we had Floren, because I had her by Caesarean, we told the theatre team and they were all absolutely blown away and excited, ecstatic really.

"They were sort of saying 'We've never had this before' and they were just really, really excited for us, which just made the experience really special.

"They do look very similar. Reuben was just a bigger version of Floren when he was born, so certainly there are similarities physically.

"She does look like a mini version of him really."

They were first referred to the Bristol Centre for Reproductive Medicine, which at the time was based in Clifton but has since moved to Southmead Hospital, in September 2005 to have intracytoplasmic sperm injection (ICSI) treatment - a technique used with in-vitro fertilisation (IVF) in which one sperm is injected into one egg in order to fertilise it.

Five embryos were produced and two were implanted in Mrs Blake's womb. The remaining three were then frozen for a future date.

The treatment was successful and in March last year the couple returned to the BCRM at Southmead Hospital when one embryo that survived the defrosting process was then implanted into Mrs Blake.

Mr Blake said: "We would definitely recommend it, but with a reality check all the way through, but I think most people that go through fertility treatment are juggling that all the time, it doesn't really leave you."

Dr Valentine Akande, lead clinician and director of fertility services at the BCRM, at Southmead Hospital, said: "We're delighted with the great outcome that Jody and Simon have encountered.

"It's a sensible approach to safely having babies.

"It's usually better to have one baby at a time rather than two because carrying twins is associated with greater risk.

"So we would very often recommend storing surplus embryos so that they can be used at a later date.

Dr Akande explained the science behind the fact that Mr and Mrs Blake were able to have twins born five years apart.

"What's happened in this happy case is that a certain number of eggs were collected in one treatment cycle and all those eggs were fertilised to create embryos.

"Now, all those embryos at that stage could be considered twins, triplets, quadruplets or quintuplets, if they were all put back together at the same time and she had become pregnant, say with five.

"What's happened here, and the sensible thing to do, was to put back one or two earlier on and save those surplus ones for use at a later date, and that is exactly what has happened.

"So the surplus embryos were kept in storage and, when they were ready to use them, we brought them out of the freezer, saw that they were still healthy, and one of them survived and was put back into Jody's womb and we've got a baby.

"It does depend how you interpret the term 'twins' - twins generally means that they are born at the same time.

"But, yes, twins in that they have come from the same batch of embryos, collected from the same treatment cycle - so twins born at a different time - but not a twin pregnancy, when they have grown in the womb together."

Picture and words courtesy of the Press Association.