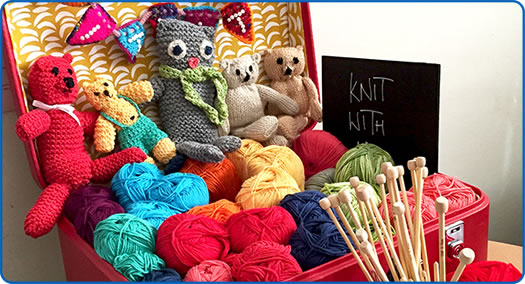 From the success of the Giant Jumper, the project changed and grew as Ali visited more parts of the hospital, working with older patients in Elgar House, neuro patients in the Rosa Burden Centre and new mothers in the neo-natal intensive care unit (NICU).

Ali taught knitting and crocheting to new mums and mums-to-be in Southmead’s NICU, creating a positive activity during stressful times, giving parents life-long skills and forming a small sanctuary of normality on a very busy ward.

At the special request of NICU matron Gill Taylor and developmental nurse Lisa Ramsey, the knitting group decided to create items for the Christmas stockings that the team give to every baby in NICU on Christmas Eve. And from here the Wonky-Eyed Teddy was born, affectionately named by one of the new mum knitters, because the knitters were all learning and it didn't matter if they weren't knitted to perfection.

The target was to make 35 teddies, one for each of the tiny beds in NICU.  But after an extensive publicity campaign, woolly packages started arriving from across the UK, from as far afield as Cornwall, London and Liverpool, as well as dozens from local volunteers, staff and patient knitters.

The grand total by Christmas Eve was 196, meaning every baby born at Southmead and in Cossham’s Birth Centre over the Christmas period was given a very special hand-made present.

They are still being knitted & donated to this day to support the work of Southmead Hospital Charity, and if you’d like to join in you can download the pattern