What does RhD Negative mean?

How does being RhD Negative affect me and my baby?

What can be done to prevent this happening?

The medical profession are very aware of this problem and can prevent the mother’s immune system from ‘learning’ to make RhD antibodies for her by giving injections of Anti-D gammaglobulin. These injections are usually given into the muscle of the upper arm or leg.

Anti-D should be given whenever it is thought likely that there could have been a leakage of baby cells into the mother’s circulation. This is known as a sensitising event.

Sensitising events can occur in any of the following situations:

At every sensitising event the RhD negative mother should have a blood test (known as a Kleihauer) to check for antibodies and fetal cells prior to having an additional injection of Anti D as soon as possible (within 3 days).

It is important when the event occurs that you contact your midwife or hospital where you are planning to have your baby, or GP to arrange this.

Some women, however will become sensitised without any obvious sensitising event (1-2 in every 100 pregnancies) hence the recommendation for Anti-D to be given routinely to rhesus negative pregnant women (prophylactic or preventative treatment).

What is Anti-D Gammaglobulin?

Anti-D is a blood product obtained from blood donors who have been sensitised to RhD positive cells.

The Anti-D used in England is imported from countries where there are no reported cases of Variant CJD and the blood has tested negative for HIV, Hepatitis B and C.
Anti-D works by rapidly destroying any baby blood cells in the mother’s circulation before she can make her own antibodies.

This means that the mother does not have her own antibodies available to cause HDN in this or her next pregnancy. A simple injection of Anti-D therefore protects both the mother and her baby.

Are there any side effects?

Rarely an injection of Anti D can cause an allergic response in the mother, as can many medications. Reported reactions have been: short-term discomfort at site of injection, itching and rashes, mouth ulcers, joint pains, shaking and dizziness and in very rare cases shortness of breath and swelling of the face. For this reason we recommend that the injection is given in a hospital, health centre or doctor’s surgery and we ask that you remain there for 20 minutes and report immediately if you feel unwell.

You should inform your doctor if you have any of the above side effects after you have left the surgery. We would however, expect any of the serious allergic reactions to occur within the 20 minutes that you remain in the surgery, enabling treatment to be given immediately. 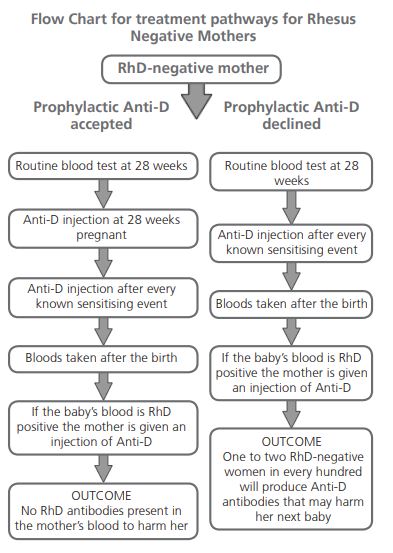