Brain tissue is composed of cells that conduct impulses called nerve cells or neurones. The largest group of cells in the brain surprisingly however are called ‘glial’ cells which support and nourish the nerve cells. There are different types of glial cells. The commonest type is called an astrocyte (gliomas arising from an astrocyte are called astrocytomas). Other types of glial cells are Oligodendroglia (tumours arising from this are oligodendrogliomas), and ependymal cells (tumours arising from this cell are called ependymomas). A tumour that arises from any of these three types of cells is loosely called a glioma. The cause of these tumours is unknown. Scientists are conducting environmental, occupational, and genetic research to better understand tumour growth. All gliomas are graded on their rate of growth i.e. how fast or how slow they are growing. The commonly used WHO grading system uses a scale of I to IV . Grade I and II tumours tend to be slow growing. Grade III and IV tumours grow more quickly. The word 'anaplastic' means malignant. By a recent change in definition any Glioma would be called 'Cancer' but the degree of growth and invasiveness will vary depending on the grade, and other characteristics which are both tumour specific and person specific.

Astrocytomas are the commonest type of gliomas. Generally the term ‘glioma’ loosely implies an astrocytoma unless another particular type is specified.

World Health Organization (WHO) grade 1 astrocytomas (pilocytic astrocytomas, pleomorphic xanthoastrocytomas, subependymal giant cell astrocytomas, and subependymomas) are uncommon tumours which can often be cured by surgically removing the tumour (resection). Pilocytic astrocytomas typically occur in children and young adults and the best treatment is surgical removal if technically feasible. Even if the surgeon is not able to remove the entire tumour, it may remain inactive or be successfully treated with radiation.

Grade II tumours are defined as being infiltrative gliomas — the tumour cells penetrate into the surrounding normal brain, making surgical cure more difficult. Most patients with grade II glioma (oligodendrogliomas, astrocytomas, mixed oligoastrocytomas) are young people who often present with seizures. The median survival (defined as the time from either diagnosis or treatment at which half of the patients with a given disease are found to be, or expected to be, still alive. It means that the chance of surviving beyond that time is 50%) varies with the cell type of the tumour. People with oligodendrogliomas have a better prognosis than those with mixed oligoastrocytomas who have a better prognosis than someone with an astrocytoma. Other factors which influence survival include age and performance status (ability to perform tasks of daily living). Due to the infiltrative nature of these tumours, recurrences are relatively common. All these patients will be discussed at our multi disciplinary meeting and appropriate management planned. Most of these patients require surgery to excise the lesion or a biopsy (obtaining a small sample of tissue to study it under the microscope) as the first step. Following this the options include continued surveillance with regular MRI scans and clinic reviews, or participation in clinical trials involving radiotherapy or chemotherapy. Most grade II gliomas eventually evolve into more aggressive tumours (grade III or IV) and cannot be cured by surgery and radiation therapy. A practical approach is to remove as much of the abnormal tissue as possible without causing neurologic injury.

Grade I and II gliomas are collectively called Low-grade gliomas, and grade III and IV tumours are called High-grade gliomas. The High Grade Glioma’s are namely:-

Anaplastic astrocytomas occur more often in young adults. Patients with anaplastic astrocytoma often present with seizures, neurologic deficits, headaches, or changes in mental status. The standard initial treatment is to remove as much of the tumour as possible without worsening neurologic deficits. Radiation therapy has been shown to prolong survival and is a standard component of treatment. In general, median survival ranges from three to five years. Chemotherapy is an option depending on the cell type, (i.e. Oligodendroglioma) genetic markers and other patient specific factors. Please see Oligodendroglioma page for a link to the NOA-04 trial to clarify recent advances in decision making between radiotherapy and chemotherapy in grade 3 gliomas.

Although this tumour can occur in all age groups, including children, the average age at which it is diagnosed is 55 years. Symptoms often begin abruptly. Seizures are also relatively common.

Surgical removal remains the mainstay of treatment, provided that unacceptable neurologic injury can be avoided. The extremely infiltrative nature of this tumour (i.e. the boundary between normal brain and tumour is very difficult to distinguish both on scans and at surgery) makes complete surgical removal very difficult. Although radiotherapy rarely cures glioblastoma, studies show that it doubles the median survival of patients, compared to supportive care alone. A recent important study (known as the 'Stupp' trial) showed a benefit for chemotherapy using temozolomide in patients with glioblastoma multiforme. In the study, the median survival of patients who received temozolomide in addition to radiotherapy was increased by 2.5 months and two-year survival by 16 percent.

Treatment options for glioblastoma that recurs after radiation and use of temozolomide must be carefully weighed according to the needs of each patient. Because all therapies have limited benefits, symptom control with end-of-life care may be appropriate on occasions. Participation in a well-designed clinical trial will also be considered where available.

What are the common symptoms?

Everyone is an individual and symptoms may be different in different people. The symptoms described below are a generalisation of common symptoms at the various sites within the brain. An individual may experience some of these, all of these or none. Common symptoms include:

Lower grade tumours (Grades I and II) present more often with seizures or fits. The higher grade tumours (Grades III and IV) grow more rapidly and can produce a lump inside the brain in a short span of time. Since the skull cannot expand, the brain is unable to compensate for this increased mass quickly and hence the first symptoms usually are due to increased pressure in the brain. Headaches, seizures, memory loss, and changes in behaviour are generally the most common symptoms of intrinsic (i.e. inside the brain tissue) brain tumours. Other symptoms may also occur depending on the size and location of the tumour. The diagram below shows the major functions of each lobe of the brain. 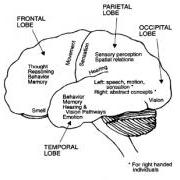 NB: this list is not exhaustive and you may experience symptoms not listed here.

The most frequent symptoms are change in personality, mood and behaviour. There may also be weakness of one side of the body or seizures causing jerking of the body.

Seizures in this area are a common symptom. They may result in a number of sensations such as:

These usually only last 1-2 minutes.

What happens to me when I have these seizures?

After a neurological examination, a CT scan and/or MR scan is required. If a tumour is present, the scans help your doctor determine the size, location, and probable type of tumour. However, only an examination of a sample of tumour tissue under a microscope (a biopsy) confirms the exact diagnosis.