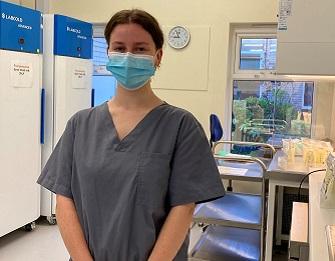 The Donor Milk Bank at Southmead Hospital is celebrating its 10th anniversary.

The bank receives milk from donors, which is used to support the most vulnerable premature babies across the South West.

It was initially set up to support the babies in the Neonatal Intensive Care Unit (NICU) at Southmead Hospital. In 2016, the milk bank expanded and became the first centrally NHS funded milk bank in England, providing donor milk to the 12 neonatal and special care baby units in the South West Neonatal Network, covering hospitals from Gloucestershire down to Truro, and Swindon to the East.

In the last two years the milk bank has been distributing an average of 60 litres per month of donor milk for babies across the region and has recruited its 834th donor.

Donor milk is used for babies born before 32 weeks gestation or with a birth weight less than 1,500 grams if their mothers are unable to produce enough of their own breast milk.

Milk is donated by mums with a surplus of milk from breastfeeding or expressing for their own babies. They go through a screening process to become donors and all milk is tested and pasteurised at the milk bank.

The service is supported by a network of volunteer drivers who pick up donations and deliver them throughout the South West once they have been processed at the milk bank.

Consultant Neonatologist at Southmead Hospital NICU, Richard Wach said: “We are very proud to be celebrating 10 years of the milk bank.

“We know that breastmilk is the best feed for vulnerable preterm babies. Having easy access to donor milk means that we are able to support mothers to provide exclusive breastmilk feeds for their preterm babies.”

Cathy Budd, Infant Feeding Specialist Nurse added: “We are very grateful to all who have supported our work and especially to all mothers who have so generously donated their breastmilk to support other mothers.

“We are also very grateful for all the support we have from all the volunteer drivers who collect milk from the donors and distribute the processed milk throughout the South West.”

The South West Neonatal Network is supported by volunteer riders and drivers from Bloodbikes NICU support, Bristol, Devon and Cornwall Freewheelers and Healthy Babies UK, who host a hub in Tiverton.

Since 2020 donations to Southmead Hospital Charity have supported the volunteer riders and drivers that distribute milk around the region.