Southmead Hospital Move Makers, a group of volunteers based in Southmead Hospital in Bristol, have been honoured with the Queen’s Award for Voluntary Service - the highest award a voluntary group can receive in the UK. 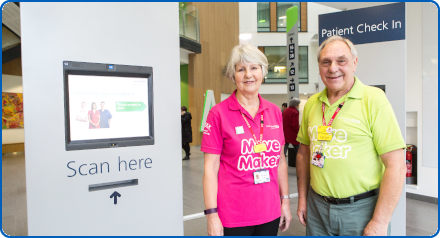 The popular Move Maker volunteers were initially recruited for a month to help patients and visitors find their way around Southmead Hospital’s new Brunel building, which is run by North Bristol NHS Trust, during the big move in May 2014.

But the Move Makers – who were inspired by the Games Makers of the London 2012 Olympics – proved to be so popular with people coming into the new building it was decided to keep them on indefinitely.

The volunteers, who are identified by their brightly-coloured T-shirts, greet patients and visitors as they come into the hospital, help them check-in for their appointments, answer queries, direct people around the building and arrange wheelchairs for people with mobility issues.

Representatives from the Move Makers received their award at a garden party which took place at Buckingham Palace, along with other recipients of this year’s Award.

The Move Makers are one of 281 charities, social enterprises and voluntary groups to receive the prestigious award this year. The number of nominations and awards has increased year on year since the awards were introduced in 2002, showing that the voluntary sector is thriving and full of innovative ideas to make life better for those around them.

The Queen’s Award for Voluntary Service aims to recognise outstanding work by volunteer groups to benefit their local communities. It was created in 2002 to celebrate the Queen’s Golden Jubilee.  Winners are announced each year on 2 June – the anniversary of the Queen’s Coronation.

Award winners this year are wonderfully diverse.  They include volunteers helping people overcome mental health problems through sport, volunteers using caravans as mobile cafe/information centres in geographically remote locations and another group mentoring children who have a parent in prison.

Move Maker Volunteer Manager, Jill Randall, said: “I am so proud of my team of Move Makers and all that they have achieved over their first five years.

“It is wonderful that all our commitment and enthusiasm has been recognised.

“This really is the highlight of my career at North Bristol Trust and I thank my team for making it possible.  I love them all.”