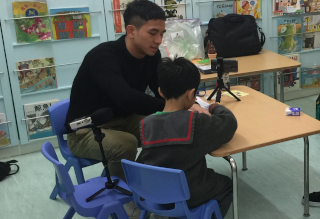 Background to the project:

Speech sound disorder (SSD) is one of the common problems that children face in their childhoods.  According to research, between 2% and 25% of children aged 5 and 7 years old have SSD (Law et al, 2000). When children learn to say new words, most children make some speech errors, which should diminish as they get older. SSD occurs when these errors continue beyond the age when we expect a child to have mastered specific speech sounds.  Most speech errors occur when the speech sounds are substituted, omitted or distorted.  The errors may affect how well a child is understood and can potentially limit his/her interactions with other people and negatively impact on the child's social and emotional development.

SSD is usually diagnosed by speech and language therapists using formal articulation tests and oral mechanism assessments.  As children make age-appropriate and age-inappropriate mistakes during their development, it can be difficult for parents or teachers to identify if there is a problem. Therefore, a request may be made for a formal assessment by a speech and language therapist to determine if a problem with speech exists.  This can lead to delays in accessing intervention.

Not all children need a formal articulation assessment. Some can be assessed using a screening tool which can be used to identify those children who need a more complete and thorough assessment from those who need advice only. The purpose of a screening tool is to quickly identify those children whose speech is within normal limits and those who may have SSD. People identified as falling outside normal limits can be seen or referred for complete formal evaluation in a timely fashion.

Thus, the primary purpose of this study is to determine:
1) If a test which has been developed to screen children’s speech is accurate enough to be used as a screening tool to identify children with speech sound disorder.
2) How accurate the algorithm which has been developed to analyse speech sounds is when compared to a speech and language therapist.

Data collection is under way. The research team at the Bristol Speech and Language Therapy Research Unit (BSLTRU) are phonetically transcribing the speech of 200 native English speaking children aged 3 to 6 years old. At the end of the data collection, the transcriptions and audio recordings will be sent to the Chinese University of Hong Kong for analysis in order to answer the research questions above.

Within this study, there is also a unique opportunity to investigate how intelligibility varies in children with typically developing and impaired speech and how it might be perceived differently by parents and teachers. Intelligibility is often the reason for referral to speech and language therapy services and there is sometimes a mismatch between what parents and teachers consider reason for concern. The ‘Intelligibility in Context Scale’ is a seven-item parent reported measure which has been validated and provides information on how frequently a child is perceived to be understood by a range of communicative partners. In this study, we will also be collecting and comparing data on the Intelligibility in Context Scale when completed by teachers and parents.

An additional concern with regards to speech development in children today is the anecdotal evidence from teachers that children are starting school with weaker speech and language skills than twenty years ago, and that this is having an impact on their developing literacy skills. The data collected in this study will also be compared with that collected in a previous community population study and will enable us to investigate whether this is indeed the case. We will therefore need to explore:

3) How parent report of children’s intelligibility compares to that of teachers’ for children aged 3 years to 6 years, 11 months.
4) How parents and teachers reports of intelligibility correlate with measures of speech production collected during assessment by a speech and language therapist.
5) What patterns of speech production are observed in a sample of children aged 3 years to 6 years, 11 months today and how this compares with the speech of child participants in the Avon Longitudinal Study of Parents and Children (ALSPAC) in the 1990s.