The Southwest Neonatal Network Donor Milk Bank was established in November 2011 at Southmead Hospital in Bristol. We are one of 15 UK milk banks and the only one in the South West.

Why do we need a milk bank?

For premature and vulnerable babies donor breast milk is the next best nutrition if a mother’s own milk is unavailable. It offers specific benefits for these babies:

How does it work?

Frozen breast milk is collected from a donor’s home regularly and is delivered to the milk bank to be processed. After pasteurization, donor breast milk is distributed to neonatal units around the south west to be given to babies who may need it.

Being a milk donor

Breast milk donors exclusively breastfeed their own babies. We can accept donations of their excess milk from when their own baby is at least 6 weeks old and until they are about 6 months of age.

Mothers who are interested in donating are screened (in a similar way to blood donation screening) to ensure their milk is safe to be given to premature and sick babies. This process involves a blood test, a visit to the hospital with their baby to meet a member of the milk bank team and the completion of a short lifestyle and medical history questionnaire. If you are interested please contact the Milk Bank on milk.bank@nbt.nhs.uk
For further information on donor milk please visit the UKAMB website www.ukamb.org 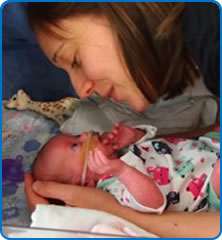 Our daughter, Abigail, was born at 25 weeks gestation weighing just 550g. After the initial shock of giving birth so early, feeding Abigail my expressed breast milk became a way that I could still contribute to my daughter's well-being despite her being inside a plastic box and not being able to hold her. It was amazing to hear that I could still produce breast milk and feed it to her through a tube despite such an early birth.

Yet at 550g, the amounts of feed she could take were only a very small portion of what I was able to produce. After filling up my home freezer with breast milk one of the NICU nurses suggested I consider donating milk to the milk bank. The process of becoming a donor was easy - just a bit of paperwork and a blood test. I then arranged for collection of the milk by Mike on behalf of the milk bank. Mike came to the house and even gave me a few lifts into the hospital as well at the same time - a very practical solution to an oversupply of milk. But the best thing was the feeling I got when I first saw someone's baby being fed donor breast milk (the milk had a different coloured lid indicating donor milk). I obviously didn't know if it was mine or not, but seeing another baby benefit made me feel that some good had come from my own situation.

Our daughter is now doing well and I like to think that the benefits of having fed her breast milk for the first eight months of her life have put her in good stead for the future. I hope that the donor milk has done the same for other babies.