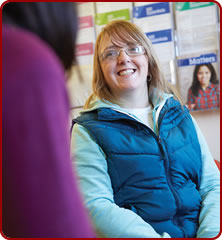 No one knows the exact cause of MS, but it is likely that it is influenced by a mix of genetic and environmental factors.

MS is not directly inherited as there is no single gene that causes it. However, it is  likely that a combination of genes make some people more susceptible to developing MS, but not everyone with this specific gene combination will develop the disease.

While MS can occur more than once in a family, it is more likely this will not happen. There's only around a two per cent chance of a child developing MS when a parent is affected.

MS is more common in areas further away from the equator. It is virtually unheard of in places like Malaysia or Ecuador, but relatively common in Britain, North America, Canada, Scandinavia, Southern Australia and New Zealand.

It is not clear why people further away from the equator are more likely to get MS, but it is possible that something in the environment, perhaps bacteria or a virus, plays a role.

No single virus has been identified as definitely contributing to MS, but there is growing evidence that a common childhood virus, such as the Epstein Barr virus (which can cause glandular fever), may be a contributory factor.

There is also a growing amount of research that suggests that a lack of vitamin D could be a factor in causing MS. During the summer months, we get most of our vitamin D from exposure to sunlight. Low levels of vitamin D have been linked to higher numbers of people developing many different conditions, including MS.